Alia Shalaby recommends Hadil Ghoneim’s Etisalat-shortlisted middle grade novel, A Year in Qena (سنة في قنا), by Hadil Ghoneim, which she calls “a masterpiece” that “all audiences will enjoy reading”: 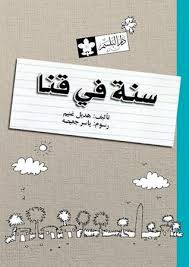 By Alia Shalaby, Special to ArabKidLitNow!

A Year in Qena tells the story of a middle-school boy who must move from Cairo to Qena, a city located in Egypt’s rural south. There, he’ll live with his family for a whole year. The story, which is relayed through the protagonist’s journal reflections, addresses a number of big issues through a young adult’s eye, paying attention to the small details that concern young people but might go unnoticed by adults.

Among the issues addressed are major life changes and how a young person struggles to handle and adapt to them; feeling alienated when moving to a new place where everyone shares the same background but has nothing in common with them; and the conflicts and mixed feelings that come with leaving home and adapting to a new culture. It also describes the challenges faced by a  privileged boy who just moved from the city to a rural place where most of the facilities he’d been accustomed to aren’t there. Throughout this, the novel gives a glimpse of the Saedi (southern) culture, represented in the grandmother’s character, in a very interesting and simple way. The story also touches on some social issues in the Egyptian south, such as tribalism.

But A Year in Qena’s biggest strengthlies in the fact that it presents the Saediculture in a way that defies the common “Saiedi” stereotypes, as viewed in popular culture and internalized by many people (including children) in Egypt, as a result of media presentation. All this is relayed in a simple, interesting, kid-friendly language that can also appeal to adults.

Sana Fe Qena is a beautiful book that all audiences will enjoy reading.

A whole year in Qena?! No way!

Why should I leave my room, my friends and my school and go live in the rural deep south? How would I survive in my grandmother’s old house? Ewwww! I still remember how much I hated the smell of that place last time we visited Teta.  And I don’t even want to imagine what the school there would be like and the kind of kids who will be in my class.

I do love Teta Rouka and I totally want her to get better. Mama says Teta needs her there because my uncle’s wife is busy with a new baby. If I were only a couple of years older, I could have convinced her to leave me behind in Cairo where I belong. I would have been perfectly fine living without an annoying little sister, and with one parent who travels all the time like Baba. But I’m not old enough, so they get to turn my life upside down just like that.

Of course if it were any other grandmother in the world but my headstrong Teta, she would have made everybody’s life easier and just come stay with us here. It’s nicer and better and all the doctors are here anyway. But no. Not Teta Rouka. She would never leave her precious smelly farm and her crowded crumbling home for anywhere else.

Anyway. This is useless. There’s no escape and I just have to deal with my destiny. God help me! Maybe I won’t notice the difference if I isolate myself from everyone and everything. I’ll bring along my boredom-shattering weapons: electronic games, books, art supplies and this diary. I’ll probably be busy studying and doing homework all the time. Everybody says the second year in middle school is the hardest. Which means I was up for a miserable year anyway. I just wish I had a computer. Baba promised to buy me one at the end of the year.

Honestly, that would be a fair reward for being tortured a whole year!

We arrived in Qena a couple of days ago. Mama saw how shocked Dina and I were, so she told us that it might be easier if we take it in one day at a time, and not think too much about the fact that we’re spending the rest of the year here. Dina is still in fifth grade, so maybe she can forget facts and get used to anything quickly, but I can’t stop thinking. I already miss my friends, and I’m really worried about the new school, about sharing a bedroom with my cousins, and about toilets! Yes, toilets here make me nervous! I’m not used to squatting!

But I must say that after the great soccer ball game we played today, and the even greater lunch we had after, I felt better.

Teta is so sick that she hardly moves, but she still holds the power around here. Everyone listens to her, even my fearsome Uncle Omar. She watches everyone and comments on everything. Sometimes, her comments are funny. Today she heard Mama mention that the weather is nice and not as hot as we expected. She then said; “Thoth orders the heat to die.” Then she looked at my uncle and yelled “Thoth, water thy land, don’t laze around”!

I didn’t really understand what she meant by Thoth. At first, I thought she was talking about berries, which are called toot, and I had never seen a berry tree here. But Mama explained that tomorrow is the New Year according to the Coptic calendar and that Thoth is the name of the first month and the name of the ancient Egyptian god of math and science. My silly sister asked her what does Teta have to do with all that, since we’re not ancient anymore and we’re not even Copts.

From what Mama said, it turned out that Egyptian farmers still use their ancient calendar because it’s very good at describing the farming seasons and the climate. I was kind of impressed that Mama and Teta knew these things. Maybe it was a good sign that we came here right at the beginning of the new agricultural year. I decided that in my case “Thoth orders my fears to die”!