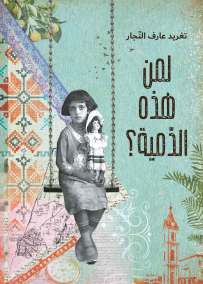 Whose Doll Is This? is a Palestinian YA story for our times—a compelling tale of love, loss, injustice, and the possibilities of restitution. This page-turning coming-of-age tale centers on the discovery of a long-disappeared childhood doll and raises key issues, including cultural appropriation and coming to terms with one’s roots. WHOSE DOLL IS IT? is the fourth YA novel by award-winning author Taghreed Najjar, a 2019 nominee for the Astrid Lindgren award and a several-time winner and shortlistee of the Etisalat Prize for Arabic Children’s Literature. Najjar’s books have been translated to English, Italian, Swedish, Turkish, and French.

In Whose Doll Is This?, our teen lead, Arwa, is in her last year of high school. At first, she hardly considers herself Palestinian. She was brought up in the US, and her biggest concerns are her relationship with Stan and choosing a college. She chafes against her mom’s restrictions.

But then she comes to a lecture given by grandma, Dr. Laila, which she expects to be boring. When people heckle her grandma, Arwa begins to see things differently. This is also when she meets her new beau, Saeed. And when Arwa stumbles across her grandma’s beloved childhooddoll, she traces it back through previous owners to Nurit, who survived the Nazis and moved into Laila’s family home. Laila writes a book about the story. When it’s published, Nurit comes to a launch event and returns Laila’s old journal. But not everyone wants restorative justice: When Arwa and Laila travel to Israel to film a documentary based on the book, they meet with hostility. But now, the once-childish Arwa is steadfast.

There are more than six million diaspora Palestinians. Even more, the issues raised by this book—exile, cultural appropriation, teen relationships—would be interesting to any young adult (and adult) reader.

An excerpt from ‘Whose Doll Is This?’

The excerpt below is from chapter 15 of Whose Doll Is This?, titled “Mr. and Mrs. Wilson.” Arwa has by now found her grandma Laila’s beloved childhood doll on e-Bay, bought it from an antiques dealer, and drove out with her budding love interest Saeed to talk to the antiques dealer, Mr. Alexey. From him, she got the phone number and address of Mr. and Mrs. Wilson. When they don’t answer the phone, Sara and her friend Sara take a bus out to Bloomington, Indiana, to track them down.

Then they were on their way to Bloomington, to meet the people who’d sold the doll to Mr. Alexey.

“I feel like we’re two high-powered investigators,” Sara said. “And, since the story of your grandma’s doll is so weird and unbelievable, and since I’m going to major in film, I’m totally going to make a documentary about it. And when I’m a famous director, it’s going to win me an Academy Award.”

Arwa laughed. “Ahh, Sara, that’s an excellent dream. I agree, on the condition that I get to choose the actor who’ll play me in the film. It’s important that she be tall, blonde, and beautiful…just like me.”

“But…you’re dark-haired and short… And, of course, beautiful.”

“Of course, Madame Sara. Beautiful, smart, and full of spit and wit, just like my grandma says.”

The two girls burst out laughing. Then they got busy imagining which famous actors would star in Sara’s future film. The bus made several stops along the way, giving Arwa and Sara a chance to eat sandwiches and have a quick coffee in the station cafeteria. When they found out from the cafeteria waitress that the address of the place they were going was on the outskirts of town, they decided to take a taxi right to the front door.

The taxi stopped at a final, isolated house that was old and falling down, in desperate need of maintenance and a coat of paint. Arwa asked the driver: “Are you sure this is the right address?”

“Of course I’m sure,” the driver said anxiously. “You want me to wait for you? It might be hard for you to get a taxi back.”

Arwa glanced up at the house’s second floor, where she saw an elderly woman watching her from behind a curtain. The woman seemed upset. Suddenly, Arwa and Sara heard the sound of a dog barking and a man calling, “Sit, Star. Sit!” Before Arwa could press the bell, the door opened up and a huge, bald man stood in front of them with a long gray beard, worn clothes—and a hunting rifle in his hand.

The man glared at them. “Are you from the debt-collection agency?” he yelled. “I know what liars you are. You send young girls so we think you’ve got good intentions. But then, when we open the door, boom, you hit us with a court summons. Go on, get out of here before I take a shot at you. It’s my right, since you’re trespassing on my private property. Go on, get out of here. Now!”

Arwa and Sara took several steps back, shocked by this reception. Sara whispered as she tugged on Arwa’s arm: “Come on, Arwa. Let’s get out of here before we get hurt!”

Arwa yanked her arm back. “No. I’m not going until I get an answer about the doll.” She approached the man, saying, “You’re mistaken, Sir! We’re here for a totally different reason, and we’re not with any debt-collection company. Please, just hear me out. We only need a few minutes of your time, and then we’ll go.”

Before he could answer, they heard a voice from inside the house. “Let them in, Fred. I’m curious what brought these girls all the way out to the edge of the world. Come on in. Come on!”

When Fred opened the door, Star walked up, sniffing and wiggling his tail in welcome. “Stupid dog!” Fred bellowed. “You’re supposed to be a guard dog to scare strangers off, not welcome them.”

The old woman coughed. “So. What brings you here to the end of the world? What do you want from us?”

Arwa cleared her throat. “Mrs. Wilson, I recently bought an old doll from an antique shop in Chicago. The owner of the shop, Mr. Alexey, told us that he bought the doll from a Mr. and Mrs. Wilson…and… Aren’t those your names? Anyhow, our request is simple. All we want to know is—how did you get the doll?”

“Doll!” Fred said. “What doll are you talking about?”

Arwa took out a photo of the doll and handed it to Fred. “This is the doll I’m talking about.”

Fred took a long look at the photo and shook his head. “Never seen this doll in my life.” Then he handed the picture to his wife. She was silent for a while before she nodded. “That’s the one… Don’t you remember, Fred? The attic was full of dusty old junk except for one old doll that was wrapped in white paper and stuck in a cardboard box.” The old woman gave them a look. “Is there a reward for this information?”

“Unfortunately, no,” Arwa said. “But let me explain the reason for our interest in this doll, Ma’am. This old doll belonged to my grandma—it’s the same exact doll she lost as a child, more than 50 years ago, in Jaffa, Palestine. My grandma’s now an old woman, and she’s curious about what happened to her doll from the time she lost it until she recovered it.”

“Some money might help me remember,” the old woman said, insistently.

Arwa and Sara exchanged looks. After that, Arwa pulled twenty dollars out of her bag. “I hope this is enough.”

“Enough?? Nothing would be enough for our food and medications. Nothing would be enough, but… Well, it seems like you’re a nice girl, and that you love your grandma. My grandkids never ask about me. I wish my granddaughter would ask after me, give me presents on the holidays. But… they’re my heartbreak. I barely see ‘em once a year.”

She fell silent for a moment. Then she said: “I’ll tell you about the doll because you’re good girls. When we moved into this house, almost twenty-five years ago, we found a bunch of old junk in the attic, left behind by the people who lived here before us. I remember the doll especially, because it was wrapped up so carefully and put in a white cardboard box. We needed money, and a neighbor said we could sell that and some other old junk to an antique shop. We sold the doll and all the rest of it for around $300. Seemed like a lot at the time, but clearly we made a mistake, since there must be people like your grandma who’ll pay a lot more.”

Disappointment spread across Arwa’s face. “Do you know the address of the old owner?”

“We told you we bought the house twenty-five years ago,” Fred said sarcastically. “How exactly would we remember?”

Mrs. Wilson snorted. “We don’t even remember what we ate yesterday.”

Arwa thanked Mrs. Wilson. As she walked out, the old woman said, as she closed the door behind them, “If you want to find the name and address of the old owner, you’ve got to go to a company called Renewable Real Estate at the center of town. They might be able to help you.” Then, after she shut the door, she shouted: “And never come back!”